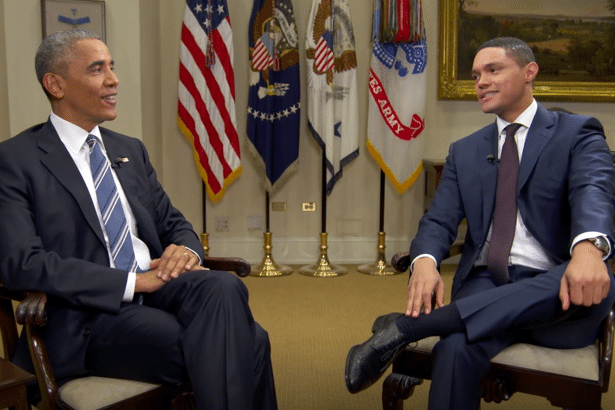 President Obama doesn’t seem to be as worked up as everybody else stuck on the panic button. This interview is a gentle, mostly sober conversation with Trevor Noah.

Trevor Noah Turns to President Obama for Reassurance The Daily Show host’s wide-ranging conversation with the outgoing politician had an air of melancholy in the wake of Trump’s election.

As President-elect Donald Trump’s transition unfolds, with new twists and turns every morning, the waning days of the Obama administration have played out in curious parallel, a sort of melancholy off-Broadway production to the gaudy, bizarre spectacle of Trump Tower. President Obama’s farewell conversation with the Daily Show host Trevor Noah Monday night focused on many of his administration’s accomplishments, and was framed by the obvious respect that Noah, a biracial African comedian raised by his mother and grandmother, has for them. But the discussion had the same tinge of genuine fear that has characterized other recent interviews with the president, related specifically to one looming question: What happens now?

The president’s historic legacy is in so many ways secure. But over the course of their 20-minute conversation, he and Noah touched on signature pieces that now seem under threat, specifically Obamacare, progress on race relations, and the country’s geopolitical standing in the world. It was a sober meeting, reflective of Noah’s clear desire not to imitate the more skeptical, jabbing style of his predecessor Jon Stewart, but to instead position himself as a late-night host who will often choose to swerve away from an easy laugh in favor of a more even-handed dialogue.