The fatal assumption was that Americans would choose to think and learn, instead of cherry picking the blogs and TV channels 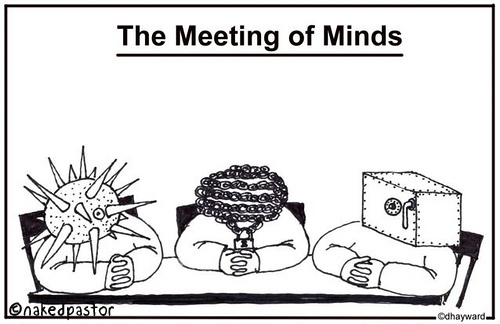 A year or so ago I found myself tired of wading into online bar fights. I found myself embarrassed about the many things I thought needed some sort of attack-mode approach to anyone who disagreed with me.

So there’s feeling burnt out and therefore ready to drop out, shut up and mind my own business. Doesn’t work for blabbermouths like me.

I still react to what I read or hear with a large grain of salt and recommend others do the same.

I still believe in the profound need for critical thinking – something most of us were never taught or trained to practice.

I still believe Civic Duty is vitally required of all of us.

I still look stuff up and share what seems to be important.

And, I solicit others to send me their own recommendations from which dialogue gets started.

Glory be to the comments section.

I begin with one of my favorite articles ever.

AMERICA: Y UR PEEPS B SO DUM?

Doubting readers may consider America’s health institutions, the insurance corporations, hospital chains, physicians’ lobbies. Between them they have established a perfectly legal right to clip you and me for thousands of dollars at their own discretion. That we so rabidly defend their right to gouge us, given all the information available in the digital age, mystifies the world.

Two hundred years ago no one would have thought sheer volume of available facts in the digital information age would produce informed Americans. Founders of the republic, steeped in the Enlightenment as they were, and believers in an informed citizenry being vital to freedom and democracy, would be delirious with joy at the prospect. Imagine Jefferson and Franklin high on Google.

The fatal assumption was that Americans would choose to think and learn, instead of cherry picking the blogs and TV channels to reinforce their particular branded choice cultural ignorance, consumer, scientific or political, but especially political. Tom and Ben could never have guessed we would chase prepackaged spectacle, junk science, and titillating rumor such as death panels, Obama as a socialist Muslim and Biblical proof that Adam and Eve rode dinosaurs around Eden. In a nation that equates democracy with everyman’s right to an opinion, no matter how ridiculous, this was probably inevitable. After all, dumb people choose dumb stuff. That’s why they are called dumb.

After stint in Navy became anti-war hippie, ran off to the West Coast … lived in communes, hippie school buses… started writing about holy men, countercultural figures, rock stars and the American scene in 1971 … lived in Boulder Colorado until mid 1980s … 14 years in all … became a Marxist and a half-assed Buddhist … Traveled to Central America to write about third World issues…

Moved to the Coeur d’Alene Indian reservation in Idaho, built a cabin, lived without electricity, farmed with horses for seven years … tended reservation bar (The Bald Eagle Bar), wrote for regional newspapers… generally festered on life in America … Moved to Moscow, Idaho, worked on third rate newspaper there … Then moved to Eugene Oregon, worked for an international magazine corporation pushing insecticides and pesticides to farmers worldwide.

Then back to hometown of Winchester VA to settle some scores with the bigoted, murderous redneck town I grew up in. I love’em but they need a good ass kicking.