Skip to content
The fundamentalist “cosmology” of heaven has always included an “exclusive-club-with-rules” assumption.  In God’s fundamentalist kingdom, there is some sort of administrative code from which, by which and through which God works his mysteries. God is assisted by note-taking angels making sure than actions of mortals have not violated the rules by which heaven and earth are governed. It’s this supposed administrative code that is the basis for most conformity-driven theology.
When a significant block of such literal-minded religious voters sway an election, what are the consequences by which all citizens must accept? The answer is a life that to a certain degree requires submission to the notion that God is anal-retentive and overly invested in the most minute details of conformity. Such a God is not unlike the leader of a group of ten-year-olds who formed a club and made him president and rule watcher.

Truth be told, the divine autocrat beloved of authoritarians is not real. Whatever the great beyond and higher existence looks like, it ain’t that. Churches that encourage belief that heaven is the destiny and reward toward which one directs a life of accumulated accomplishments are known as performance-based religions.

I will tell you why the wisest vote will and should be opposed to candidates and programs espoused by performance-based religions. These believers incorrectly assume that God is in fact a respecter of persons, has favorites and will demonstrate a punitive divine righteousness in support of those who support the tyrant.

Thomas Paine said, “my mind is my own church.” He was opposed by the preachers and authorities of organized religion who refused to accept the notion that a man’s supposedly unorganized mind constituted a better place to worship the Divine than the temples and churches decorated with the accoutrements of someone else’s magic masquerading as true religion. 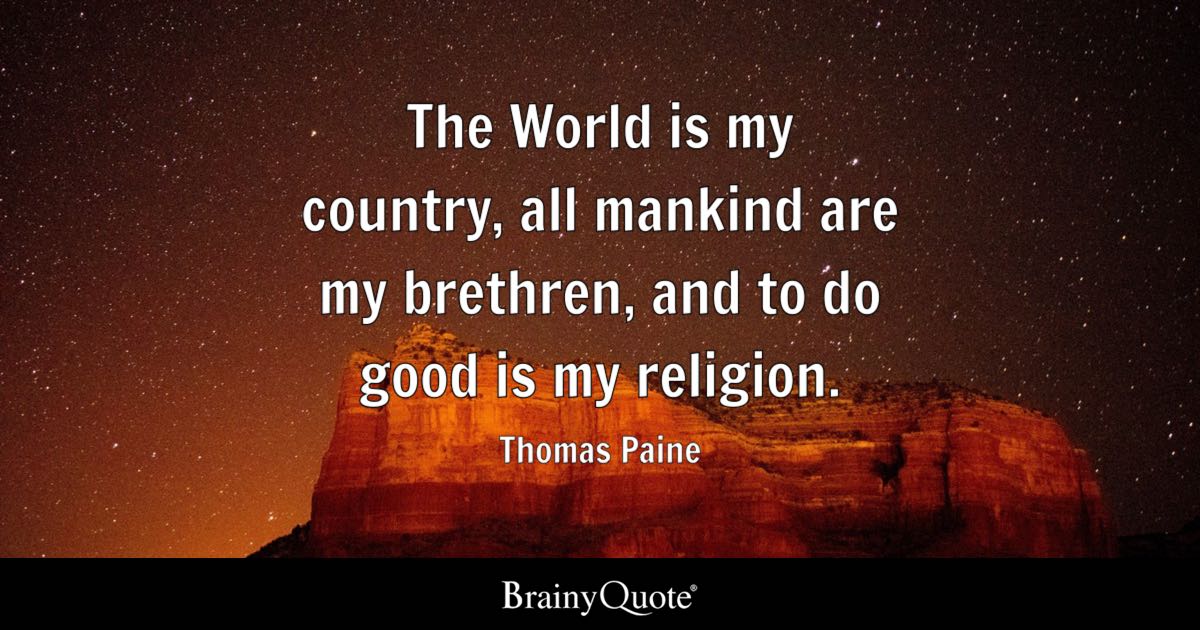 The fundamentalist Christian equivalent of the non-religious American Constitution is nothing more than systematic theologies, doctrines and programs that pattern a way of imagining god and god’s reality. Although entirely lacking proof in any physical or spiritual form of such a realm organized after the pattern of 19th-century reality,  a host of early American prophets, evangelists and circuit-riding preachers asserted in creatively imagined and described forms the notion that the ultimate truthfulness of the spirit world is based on performance and worthiness.

This imagined reality, consistently asserted over more than the past two centuries,  is why most believing biblical literalists easily and perhaps without much critical thought –  buy into Church legalism.

It becomes almost second nature to accept the idea of an over-controlling detail-obsessed God who seems much after the pattern of a controlling parent or lover. Uncritically, as an act of faith, devotion and obedience, many sincere believers interact within their circle of belief that humans are so imperfect that God created religion by which that Male Patriarch could – in a loving but domineering manner – thrust into our lives guidelines for living. Such guidelines almost casually become laws or, better said, doctrines “irrevocably decreed” which the children of said God are expected to follow.

The god-talk reflected the chosen circle as well as the rest of the world imagines a god of guidelines; a deity who demands strict adherence to doctrines and the notion that obedience is elevated at the expense of agency and that the highest spiritual approval in life is nothing more than an experiential pat on the head for being an obedient child.

Almost casually, most believers apparently see no reason to challenge the idea that the God and Father of Obedience placed humanity on the garden earth with something uglier and meaner than a mere request that the children eat no fruit of the wrong tree.

The God and Father of Obedience created a world abundant with the fruits of creative activity. Let’s make a brief and incomplete list of the performances – or in some cases, negative performances – that the children of God are expected to do … or not do …

A performance based religion puts bans on what are perceived to be inappropriate things. These bans become “laws of the Church” which by implication become “Laws of God” which are viewed than as Irrevocably Decreed and upon which a worthiness- obsessed God grants rewards.

In a performance-based-religion, members are banned from inappropriate music, television, movies, books and other literature. Freedom of expression in art, music, and other forms of entertainment are seen as risks that may cause the Father to stop attending the disobedient.

In a performance-based-religion certain food and drink products are banned and seen as the causes of risks that the Father will stop attending the disobedient.

In a performance-based-religion the Father wands strict adherence to dress and personal appearance codes the rejection of which creates a risk that the Father will stop attending the disobedient.

In a performance-based-religion scriptures become the means and tool that can be utilized to effectively stand in for a lack of contemporary legitimate on-going revelation from the God who started everything eons ago by speaking directly to his children. Scripture then becomes the weapon that confronts those who challenge would-be prophets.

“Pick up the sacred books of your religion, look for passages supporting your values, and adapt them a little to your liking. Then highlight their importance in the overall balance of the religion, and conveniently forget all those other unsavory passages that either downright contradict your values or support behaviors and attitudes that don’t fit with your inclinations.

Rather than having the guts to admit what they are doing and openly defend their right to pick and choose the passages they want to live their lives by, most people prefer hiding under the fable that their particular take on religion is the only correct one. All other people who put the accent on different messages and values contained in the same scriptures, they claim, are heretics who are twisting the essence of the religion. If this strikes you as intellectually dishonest, it’s because it is.”  -Daniele Bolelli, Alternet

The Father of Conformity either refuses or is unwilling to justify or explain how such an exclusive-means-to-salvation system and circumstance is equally fair and just to every other human being on the planet.

In a performance-based-religion the Father of Conformity has authorized the use of emotional guilt, intimidation, thought control and coercion to keep members in line. He is also seen as justifying guilt-ridden sermons and lessons designed to push believers into submitting to the authority of the leadership without question or criticism. Failure to respect the leadership creates a risk that the Father will stop attending the disobedient.

In a performance-based-religion the Father of Conformity has authorized the use of the theory that people should spend long hours at the Church and do work in the Church in order to gain rewards in heaven. A bureaucracy has been created at all levels in order to engender, monitor and “lovingly” coerce this sort of working participation which then becomes the standard by which member spirituality is measured and recognized.

The same bureaucracy becomes then a powerful instrument for limiting criticism and dissention through emotional and spiritual abuse by perceived authority and endorsement by the Father of Conformity.

One can make a case the some of those driven off are at least temporarily not prepared to deal with life and society in a manner that is free from long-internalized judgmental and narrow notions.

The gentle but rigid church programming involves and in fact revolves around forms of guilt and coercion. Within the church as well as among those driven off there is a danger of low self-esteem that causes essentially unreasonable reactions to the church itself.

Repentance becomes much more than returning to God, it involves returning to the mind set  from which one has fled in desperation. This is not unlike a battered-wives syndrome where one consciously returns to a life at home with a mean and unrepentant drunk who will continue business as usual.

There is a genuine tragedy when one feels driven off from the clan or out of the tribe  because like an enormous and ominous dark tower, the church rises in the background or even the actual center of the tribal village,  thrusting itself with impunity into the middle of family relationships to which it has no moral or God given right to interfere.

Members are forced to choose between church and family. The Father of Conformity has said nothing about why this circumstance is a positive fruit by which that Father is known among the children of men. The either-or attitude may only be a perception of those driven off when the rest of the family remains inside the righteous but unseen walls of church conformity, but the church does little or nothing to address that very  family estrangement of which the church and it’s self presentation is the principle cause.

Limited serenity that comes from separation from the direct and immediate sources of emotional pain still feels like something much better than the rigidly inflexible  cauldron of conformity whose principal legacy is misery.