I think it was sometime in October … we’uns were still in the autumn mood, Halloween planning,

plotting what trash cans we’d be knocking over in the alleys, wondering what crazy things the high school boys would be coming up with – such as moving the slickery slide into the middle of main street.

Course there was the usual lathering of waxy writing on all the building fronts … that kind of exciting October.

And then I’d come home one day from school and there they’d be, the Sears and the Speigel catalogs.

Down on the couch for probably 15 hours straight, turning impatiently past clothes, underwear and coats to the toy section. Then after a first-to-last-page review, starting over and doing it again … and again …. every day or so … til it was memorized and the Santa Claus list was bigger’n Mom’s cookbook.

That was when the mood started rising for December.

Yeah yeah yeah … Thanksgiving was exciting but in a different way. There wasn’t much magic in   a Thursday dinner with football, relatives and pass-the-turkey Dad.

Randy was only 3 years younger and we usually plotted Christmas strategy together. Adrian and Cinda were born in the mid-fifties so they weren’t part of us older boy’s tactics. Although I don’t remember an overwhelming desire for a Red Ryder bb-gun like in that wonderful movie, Ralphie rang all my memories of holiday excitement. Still does after having seen it a hundred times. (No, we never ate Chinese duck for Christmas dinner and our dogs were too short to steal a turkey.)

Then of course there was the famous panel truck driving around town playing Christmas Music via a loud speaker. Same truck did that on Brigham Young Day (July 24) playing cowboy songs.

Lietta and I were at the neighbors’ yesterday delivering a card and jar of cookie baking ingredients. They’re in their 90’s and their Christmas Tree sits on a table and is about 3 feet tall tops. But there are icicles on it … real live droopy silver icicles hanging down … and I was back in our parlor will memories of Mom letting us help her and hanging them dang icicles at the last on a tree covered with blue lights. Cora Ruger loved blue Christmas trees!

Picture this, 1950’s Christmas Eve,  Bancroft, Idaho. Without fail a Christmas Dinner at the church with all the ham, mashed taters and all the fixins you could eat. Now that was exciting. The Church was never fuller than on Christmas Eve. They all came and it warn’t fer hearing sermons and going to sunday school classes.

Suddenly, like a bat outta hell, er, I mean, When out on the lawn there arose such a clatter,
BANG!

The side door to the lawn would fly open and shut while a fat red and white phantom would come in, bells draped over his chest and back like Pancho Villa with bullet belts, snow flying and dropping from his uniform.

That guy was REAL! Best visuals and sound effects I ever saw. I was a believer at that age. St Nick was the Holiest of Holies … the only supernatural presence who showed up every year as predicted. The only one to let me sit on his lap and give me a bag of candy and nuts and asked me you-know-what.

I was too young to recognize in that duffer some local personality and it never occured to me that he was anything but who he was supposed to be.

So by then I was full of ham, taters, desert , nuts and my favorite, chocolate pyramidy things that had white cream mint on the insides (like Junior Mints but bigger). I got home and was drowsy … oh maybe for half an hour … just waiting for Mom and Dad to order us to bed … so’s we could start our painful vigil. It was painful, when the  house got quiet we were listening for any sound out of the ordinary, maybe a reindeer whinnying (do reindeers whinny?), maybe a sleigh on the roof although we knew he’d have to come in through the basement furnace and up through a heat vent into the parlor if he was going to do the chimney routine.

Then of course there was Dad the sentinel, checking up on us like a prison guard to see if we were asleep. Eventually though, the time came when we figured him out, and how to get around his prison guard act. We waited for him to fall asleep.

Then we crept into our little 4 x 4 closet that had a  hanging light. We curled up on the floor, our bodies covering the whole floor, and got out our stash of comic books. Felt like we killed off 10 hours reading and waiting for some clue that said we needed to get back into bed and pretend we were asleep.

I don’t know why. They never woke us up on Christmas morning. WE WOKE THEM up – usually earlier than they wanted.

The parlor had a big heavy sliding door and there was NO WAY you could slide that door open without our hawk-eared Momma hearing it. Or so it seemed.  These were not helicopter parents who took over our Christmas morning celebrations with “wait and have some hot chocolate!”  “Let us get up first and you boys wait in the living room.” “Here, I  want you to pose for 29 pictures before you go in there.”

Ask Lietta, I ain’t got any use fer helicopter parents. What they didn’t enjoy as kids they want to make sure their kids don’t enjoy either.

So on assorted mornings over the years there was sleds, bicycles, sleeping bags, fishing poles, and one year Captain Midnight uniforms (shades of the coming of Kirk and Spock)

Santa Claus was for me the most significant author of a sense of mystical magic which informed my older self in relating to the power of imagination in all things spiritual and creative. 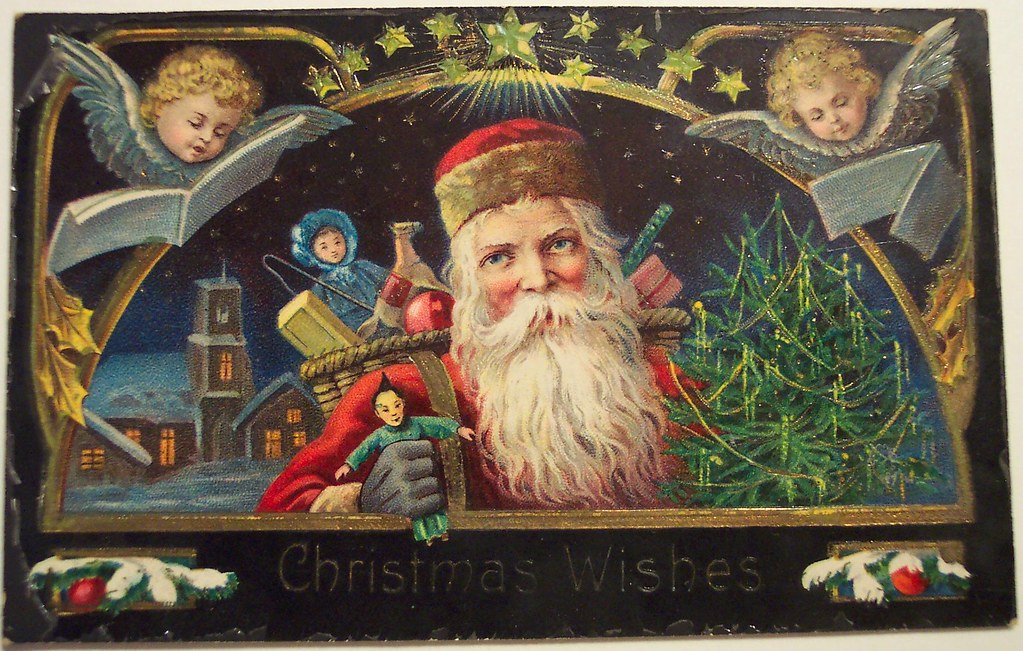 I could never describe him any better than this:

‘Twas the night before Christmas, when all through the house
Not a creature was stirring, not even a mouse;
The stockings were hung by the chimney with care,
In hopes that St. Nicholas soon would be there;

The children were nestled all snug in their beds,
While visions of sugar-plums danced in their heads;
And mamma in her ‘kerchief, and I in my cap,
Had just settled down for a long winter’s nap,

When out on the lawn there arose such a clatter,
I sprang from the bed to see what was the matter.
Away to the window I flew like a flash,
Tore open the shutters and threw up the sash.

The moon on the breast of the new-fallen snow
Gave the lustre of mid-day to objects below,
When, what to my wondering eyes should appear,
But a miniature sleigh, and eight tiny reindeer,

With a little old driver, so lively and quick,
I knew in a moment it must be St. Nick.
More rapid than eagles his coursers they came,
And he whistled, and shouted, and called them by name;

As dry leaves that before the wild hurricane fly,
When they meet with an obstacle, mount to the sky,
So up to the house-top the coursers they flew,
With the sleigh full of toys, and St. Nicholas too.

And then, in a twinkling, I heard on the roof
The prancing and pawing of each little hoof.
As I drew in my hand, and was turning around,
Down the chimney St. Nicholas came with a bound.

He was dressed all in fur, from his head to his foot,
And his clothes were all tarnished with ashes and soot;
A bundle of toys he had flung on his back,
And he looked like a peddler just opening his pack.

His eyes — how they twinkled! his dimples how merry!
His cheeks were like roses, his nose like a cherry!
His droll little mouth was drawn up like a bow,
And the beard of his chin was as white as the snow;

The stump of a pipe he held tight in his teeth,
And the smoke it encircled his head like a wreath;
He had a broad face and a little round belly,
That shook, when he laughed like a bowlful of jelly.

He was chubby and plump, a right jolly old elf,
And I laughed when I saw him, in spite of myself;
A wink of his eye and a twist of his head,
Soon gave me to know I had nothing to dread;

He spoke not a word, but went straight to his work,
And filled all the stockings; then turned with a jerk,
And laying his finger aside of his nose,
And giving a nod, up the chimney he rose;

He sprang to his sleigh, to his team gave a whistle,
And away they all flew like the down of a thistle.
But I heard him exclaim, ere he drove out of sight,
HAPPY CHRISTMAS TO ALL, AND TO ALL A GOOD-NIGHT!