Most recently they’ve danced across the stage, preening in Gilroy, El Paso and Dayton.

I thought I’d do some due diligence before writing an opinion piece about those who shoot the innocent in the name of …. well, er … whatever … or whoever …

There’s an audience for the shooter-performers. That audience doesn’t seem to be dominated or directly linked to most political partisans connected to so-called “mainline” conservatives and/or contemporary conservative republicans at the highest levels of government. Nevertheless, the audience observing the atrocities and celebrating is of significant size – particularly online and in the broadcast radars of the principal sources of public news in this country.

Any news is a product that will potentially generate revenue from which ultimately profits are harvested. Since news has become a business first and an accurate source of needful public information second, we are at the mercy of the publicists. The publicists will open the closet doors on any source that will generate revenue.

Whether genuinely pertinent and legitimate to a discussion or analysis of whatever our American values have become, purveyors of nonsense enjoy a brief moment of infamy while convincing us that their pretense at lover of country rather than hater of those who are “other” is not worthy of or deserving of civic respect. The urge is toward contempt no matter the “heroic” pretended images of a man with a gun who is doing something for his country.

The literal truth is that notions of occasional “heroic” heat packers performing acts of “heroism” involving drawing and using the weapon to “protect and defend” multitudes of innocent citizens is far outperformed by another reality: that of “heroic” compassion.

Such compassionate acts number daily in the millions … millions of  human  beings blessed by acts of kindness, respect, courtesy, assistance, donations, and contributions; not to mention verbal defenses of the honor, respect and rights to compassionate treatment  that do not require requisite signs of worthiness such as color, origin or ethnic purity.

A few minutes of searching led me to a most adequate and well-informed source.

What does it mean to be a white nationalist?

What do white nationalists stand for?

Adherents of white nationalist groups believe that white identity should be the organizing principle of the countries that make up Western civilization. White nationalists advocate for policies to reverse changing demographics and the loss of an absolute, white majority. Ending non-white immigration, both legal and illegal, is an urgent priority — frequently elevated over other racist projects, such as ending multiculturalism and miscegenation — for white nationalists seeking to preserve white, racial hegemony.

White nationalists seek to return to an America that predates the implementation of the Civil Rights Act of 1964 and the Immigration and Nationality Act of 1965. Both landmark pieces of legislation are cited as the harbingers of white dispossession and so-called “white genocide” — the idea that whites in the United States are being systematically replaced and destroyed.

These racist aspirations are most commonly articulated as the desire to form a white ethnostate — a calculated idiom favored by white nationalists in order to obscure the inherent violence of such a radical project. Appeals for the white ethnostate are often disingenuously couched in proclamations of love for members of their own race, rather than hatred for others.-Southern Poverty Law Center (SPLC)

How valid and justifiable are these views and assumptions?

This platitude collapses under scrutiny. Two favorite animating myths of white nationalists are the victimhood narrative of black-on-white crime — the idea that the dominant white majority is under assault by supposedly violent people of color — and the deceptively titled “human biodiversity,” the pseudo-scientific ascription of human behaviors, in this case along racial lines, to “non-negligible” genetic difference among humans. Appeals to the “empirical science” of human biodiversity are frequently coupled with thinly veiled nods to white, racial superiority.

In addition to their obsession with declining white birth rates, these themes comprise some of the most powerful propaganda that animates and drives the white nationalist movement. Adherents frequently cite Pat Buchanan’s 2001 book, The Death of the West, which argues that these declining white birth rates and an “immigrant invasion” will transform the United States into a third world nation by 2050, as the text responsible for their awakening, or “red pill.”

The list at the end of the article is too long to be written off as a triviality. 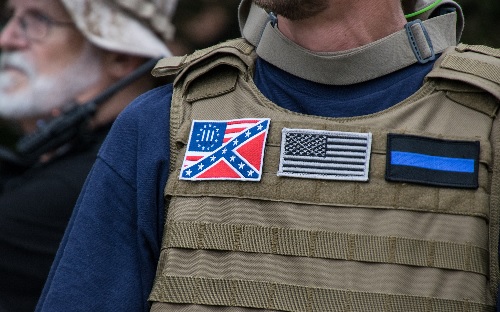 2 thoughts on “Which Liberals … er, I mean … who are the liberal traitors … I mean, who is shaming all Americans … oh hell, who do they think they are?”