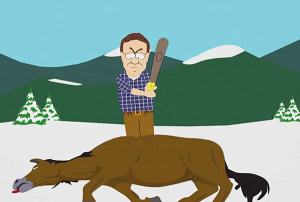 How long are we gonna gloat about election results and put off the important stuff?

How long are we gonna be distracted by smoke and mirrors that reflect a political dog-and-pony bait-and-switch- anything-but-honesty?

Governance will not fully happen if we continue to squabble with one another tossing meme grenades and quoting partisan sources so we can sound smart and civically wise. Truly, it’s time to dress ourselves in civic maturity and get on with things.

When we lived in a tiny fishing village on the Washington Coast, I watched in fascination as our dog Jake taught me something about distractions; something the I would forget and remember repeatedly over the years.

Our next door neighbor had a little but loud dog, Tito, – a ferocious loud yapper who takes it upon himself to defend his territory against all invaders. A few weeks ago that pesky neighborhood-disturbing yapper caught my attention and I looked outside. Someone had thrown what looked like popcorn out on the road in front of the neighbor’s house and 10-15 crows were after the free grub.

I watched then as the crows first positioned themselves on telephone lines and trees in a kind of tactical circle so that Tito would be busy trying to keep them all away. When a few of the crows landed at one end of the food, Tito went after them. On the opposite side, other crows swooped down and began feasting. Tito of course turned and roared after the offenders leaving his previous quarry free to move in themselves. It took less than 10 minutes for the popcorn to disappear.

I thought about how the defensive tactic of airborne bombers and submarines illustrates the value of diversion as a means of avoiding destruction. When the pilot or sub-commander orders the release of chaff after an enemy air-to-air missile or torpedo is discovered, the result is supposed to be that the “electronic” attention span of the missile or torpedo is disrupted, distracted and the attacker veers off in pursuit of a pseudo target. The good guys remain free to pursue their objective.

Well, now the partisans are using chaff on us.

It seems that like torpedoes, air-to-air missiles and Tito the homeland protector, we who strive to challenge and resist the foreign and domestic policy agenda that politicians relentlessly pursue face an almost daily dose of distracting chaff and crows who draw our attention away.

We chase the chaff and go bark at the distracting crow while the real vultures stay their course and swoop down on the unsuspecting to bite off more and greater chunks from all that has historically sustained America’s rise to economic and military power.

In this regard, I suppose many would say that the spin doctors do their job well. I’m not ready to ascribe to such stampeders some idea of superior genius that most of us lack, but do acknowledge their willingness – the outlandish gall, if you will – to simply go ahead and try whatever works; whatever can be gotten away with.

Back to the devious crows.

Shortly after watching Tito get victimized by crows smarter than he,  I was cleaning out our freezer and found two loaves of special bread we had purchased a couple of years ago on a trip. It was obvious by the few spots of mold, that two-year old frozen bread would not do for our menu. After letting the loaves thaw, I was about to toss them on our back yard when I remembered Tito.

I tossed both loaves out on to the road between our house and the neighbors and watched.

Tito did not appear, but my own dog, Jake, (who was part Australian Shepherd and Collie and looked like Lassie with a blunt nose) wandered out into the road and sniffed at one of the loaves. 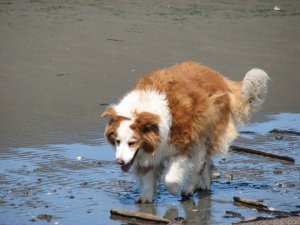 Wasn’t his cup of tea and he started to ignore it. But then, another neighbor from up the street walked by with his own dog who sniffed at the other loaf, took it in his mouth and carried it about 30 yards up the road before dropping it and moving on.

By this time the crows had gathered. Jake, like Tito had earlier, found himself invested in keeping the crows from stealing the bread. He stared at the other loaf some 30 yards off as several crows landed and started biting out chunks.

Jake rushed toward the action and the crows took flight. Standing over the far loaf he looked back to see the crows landing around the other loaf still on the road on front of our house.

Now Jake was not Tito, not excitable. Jake had a herding and guarding instinct that astounded me at times. He looked at those crows for a moment, took the distant loaf in his mouth, trotted over close to the first loaf which caused the crows to fly off.

He then proceeded to bury the loaf he’d carried back to our house, digging a hole less than 15 feet from the first loaf. The crows helplessly watched Jake bury that loaf knowing he was not to be distracted.

When he was through, he trotted over and “stayed the course” with the remaining loaf, keeping the crows from their thievery. I don’t know how long Jake sustained his vigil but I realized that his own tactic of setting aside one distraction for another more appropriate time while continuing with his original task of preventing the crows from achieving their objective was a valuable life’s lesson.

Think about that the next time you listen to someone who needs you to behave as if  you are unable to think for yourself while being educated by anyone else’s magic.

Evoking sufficient national interest should require topics worthy of attention. Aren’t there more important things upon which our civic strategy and grown-up tactics  ought to remain focused?

Republicans and Democrats are not geniuses.

Both sides’ biggest attribute  is a kind of amateur cunning driven by unreasoning pressure from a defeated incumbent president who continues to demand that his party try anything that might work and cut losses if it doesn’t; all the time thinking up something else.

Working to think one or two steps ahead of political rhetoric is hard but not impossible. Civic duty does not require unreasoning loyalty to any political party or philosophy. The country needs mature input from conservatives, liberals, social justice advocates, traditional values advocates, business and labor advocates and god-talkers. We also need to remember that none possess a monopoly on truth.

We ignore the chaff and seek the highest good of all  concerned.

It’s past time that We the People began acting like grownups.

One thought on “It’s past time that We the People began acting like grownups.”