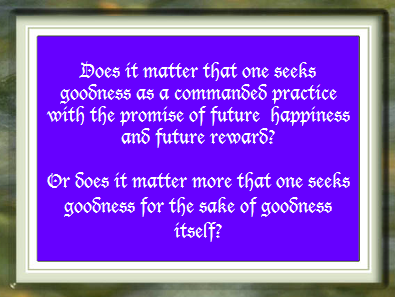 What is it that draws people to religion?

We hear contemporary couples with young children expressing the idea that if church is to be part of family life, they want to find one that teaches lots of goodness morality and a lot less about a judgmental and punitive god that expects the same from believers.

Some of these couples have not set foot in a church since they themselves were children. Other folks come to churches seeking an alternative to spiritual and psychological attitudes that have not served them well. Some are drawn to religion and to churches after some sort of personal trauma or loss, seeking answers to questions to which they’d never given conscious prior attention.

There are also those who seek an opportunity to teach families and children in particular about giving service, expecting that the social circle within a church congregation will provide that opportunity as well as one for greater social contact and interaction. Opportunities to give service in contexts other than church congregations are abundant and I would not suggest that the primary appeal of religion is an opportunity to perform some good work in a formalized moral setting.

Just what is it that our church congregations offer in their communities – and does that offering have a real potential of satisfying the needs or hungers of those looking through the doors and windows?

The enduring power of religion is not as a social club. Rather, it lies in the realm of the needs for meaning and purpose in living. The venue in life that seems to require endurance is more in the perceptive realm of mind and spirit and is not better countered by an approach of moralizing and exhortation to conscious believing with strict conformity to tradition and doctrine.

When our non-physiological internal hungers flare up, the void to be filled is not satisfied by lasagna, a hot bath or a good night’s sleep. These hungers generate not a weakness in body, but a powerful uneasiness or restlessness with life.

Often we think we are just worried about things, wanting things we don’t have, dissatisfied with work, with marriage, with friends, our community, the economy or even our favorite pro team that’s never going to win a championship.

We may even mislabel internal spiritual restlessness as being the above those particular kinds of dis-satisfactions or perhaps as something worse, some sort of depression. TV ads now tempt us to a kind of self-diagnosis where we are encouraged to take a predisposition toward depression to a medical provider in hopes of a prescription of the advertised “feel-better-medicine.”

Religion ought to hold out the possibility to the internally restless that there is something available that fills the void – something more than just Sunday worship, potluck suppers, and cliched generalities around believing.  It should be no surprise that a hunger for something more powerful arouses not just laity, but the clergy as well.

If being spiritual  means more than just going through weekly motions and repeating worn out slogans then what ought to be offered is something responsive to that internal hunger, what Alan Watts called a “non-verbal experience of the divine.” However, such an objective currently seems out of place. In Watts’ words (written in 1947 but absolutely true today), “The Church is still overwhelmingly didactic and verbose.”

The power behind our beliefs is not our ability to become educated in what scripture SAYS, thereby permitting us opportunities to publicly display how well we can read or memorize famous verses. Power lies in what scripture, prayer, tradition and reason prompt within and I’m not talking about being prompted to obey, conform and donate.

The non-verbal experience of the divine lies within the potential of every spiritual congregation but remains somewhat elusive – even perhaps hidden. The more common emphasis seems to be more on social behavior and an effort to cause or resist change by religious rhetoric.

What about a belief system that acknowledges the mystical in our psychologies of perception? Working in a mystical venue has always been a part of living. Farmers plant corn because in their minds eye they see a field of ripe corn. Buildings are constructed because an architect visualized in his mind what he later designed on paper. Meals are prepared from scratch by mothers who know recipes by heart, bring together separate materials and turn them into tasty and satisfying dishes. What is visualized internally is the source of what is created externally.

Martin Buber, referring to a non-verbal experience of the divine, wrote,

“God is the mysterium tremendum that appears and overthrows, but he is also the mystery of the self-evident, nearer to me than my I.”

That which we have labeled “mystical” is in reality a part of most everything we ourselves create and accomplish. Can we not truly say that the Mysterium Tremendum is the ultimate end we seek in actively involving ourselves in a spiritual life?

Without a mystical sense and approach to both worship and daily living, do our congregations busy themselves as social clubs more concerned about public opinion and conformity, perceiving themselves as an island surrounded by a sea of hostile, stupid or indifferent waters?

So long as our active participation is limited to a purely social venue where participation is mentally easy, almost a lazy alternative to a personal pursuit of the kind of intimacy with God portrayed by Jesus, we will go through life running the risk of doing what we do out of social habit.

Perhaps even worse, we will ultimately suffer a church-social burnout.

Clergy – all ministers – ought to openly seek a growth of independence from themselves within their congregations. Publicly telling God what to do and the people how to behave is a poor substitute for teaching and modeling spiritual independence and spiritual self-sustenance.

Telling congregations that “God has a plan for you!” Followed by some behavioral and ritual formula by which a pleased God then activates some ephemeral plan for you and your loved ones, you are invited to enter into a literalistic interpretation of a religious reality that has very little to do with the reality defined by our own intuitively activated senses.