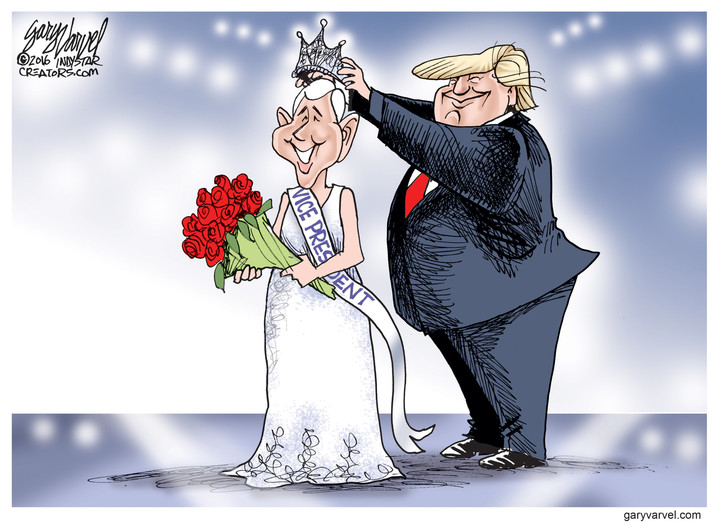 After observing several appearances with virus updates and watching the same clips in broadcast reports, it seems to me that the phrase Pence uses the most is “the American people” – a political campaign rhetorical phrase. He, like Trump, look like they are running FROM something as much as FOR something. Pence is obviously a lot political fluff but entirely low on substance.

The President and Vice President are pretending they know what they are doing. Trump seems to be The ultimate bloviator. What does it mean to bloviate? To speak for a long time in an arrogant way. An example of bloviate is for a person to give a lengthy speech about how great he is.

The Washington Examiner is an American conservative news website and weekly magazine based in Washington, D.C. Published this editorial:

Coronavirus is exposing Trump’s unsuitability to handle a crisis

Donald Trump participated in a Fox News town-hall meeting the other night, and was asked a similar question: the president is both promising to protect Americans with pre-existing conditions while at the same time asking the courts to end protections for Americans with pre-existing conditions. How does Trump reconcile this? This was his full response, according to the official transcript. Normally I’d help out by editing in short paragraphs rather than this. But it is how he talks:

“We want to terminate Obamacare because it’s bad. Look, we’re running it really well, but we know it’s defective. It’s very defective. We got rid of the worst part. And that was a very important thing. You know getting rid of the individual mandate was a very important thing. But we want to get something — if we can get the House, you’ll have the best health care and health insurance anywhere on the planet. But we have to get the House back. Now, that means we have to hold the Senate. We have to get the House. We have to, obviously, keep the White House. But, what we’re doing is managing it really well. Now, it’s a case; it’s called Texas vs. — you understand — it’s Texas who is suing. They want to terminate it. But everybody there is also saying, and everybody — we have our great senator from Pennsylvania. Thank you very much, Pat, for being here. And Pat Toomey. And — but, very important — and our — by the way, our great congressmen, I have to say, they were warriors. Right? Real warriors, in terms of the fake impeachment. I will tell you that. But, so Texas is trying — and it’s Texas and many states — they’re trying to terminate, but they want to put something that’s much better. They’re terminating it to put much better. And they’ve all pledged that pre-existing conditions, 100 percent taken care of.” – Read the transcript, W.H. Govt Briefings