Sunday: Tell a child that Heaven is church 24-7 and that child might be able to describe somewhere else for you. 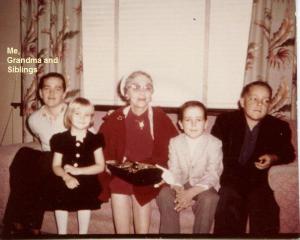 6:00 a.m. this Sunday morning and its raining, the street is still dark.

I think about what my Sundays looked like when I was but a boy in Caribou County and the mountains of Southeastern Idaho. That is what I call  Mormon Country not the religious business going on in Salt Lake City.

We were a farming community. We didn’t ride around in buggies, and – although there were occasional beards and women dressed like they’d stepped out of a rural 19th-century movie set – I suppose we could have been transported to any rural American agricultural setting and presented no obvious or stand-out difference.

Here, take a virtual tour of what it looks like now

I remember Sundays when mostly farmers and a us city, er I mean town clickers attended church.

By the time I was 12 years old, I would get up around seven, go out on the porch and retrieve the Sunday edition of the Salt Lake Tribune. I’d lay on the floor with my feet resting against the heat vent from the coal furnace in the basement. I always threw aside the front page and all that world and national stuff and open the second section. I’d start with the comics and end with the sports section.

About 8:30 I’d drag myself to the bedroom and put on my dress clothes for the Church two blocks away. The whole town was essentially a 4-block by 5-block square with a bunch of houses additionally across the tracks.

Main street, which was 4 blocks long, handled our business section where you could find a drug store on the corner next to the highway (U.S. Highway 30 which ran from Omaha to Portland), the Post Office, Arts Billiards (my grandpa’s pool hall), Sanders Furniture, Keith Mabey’s electrician business, the Barber Shop and then an open field with a raised bank all the way around that would hold the water in the winter long enough to freeze and create our ice pond for skating.

Across the street you had my Dad’s service station (Utoco Gas), a big fat tractor implement store, an empty second tavern, my Uncle Gene’s grocery store (he and Aunt Elnora lived above it, Howard’s Cafe, the Court House, the Jenkins apartments, the IGA grocery store, the Call Lumber Yard, the theater and that was it. The school maintenance garage was on the same side of the street but on the next block.

At the end of Main on the west side there was the combination grade school-junior high-high school building entitled the North Gem (North end of the Gem Valley) school district.

Across the street from the school sat the LDS church building. That’s where I’d go after reading the Sunday paper and wishing I could drink coffee with cream and sugar like Mom and Dad.

I’d put on my go-to-meeting duds and walk the two blocks to the church.

Church started at 9:00 a.m. sharp with Priesthood Meeting – the men’s stuff. We’d gather in the chapel, sing a hymn, listen to a prayer, do something of a business/agenda ritual and separate into classes. Mine was the Deacons’ quorum where us boys sat through the first of our two Sunday classes.

A guy taught us something religious that had to do with one of the 4 Mormon scriptures (Bible, Book of Mormon, Doctrine and Covenants or Pearl of Great Price.) There was a lot of the sort of wordage that – in any community of that type- gets tossed around like ketchup and mustard at a barbecue: the Lord, the Gospel, the Truth (or true church), righteousness, faithfulness and so forth. Them lessons were more or less okay if you took into account that I had to be there and if the lessons included stories.

I didn’t care what kind of stories, if they included stories my mind would sort of unleash itself and I’d walk into and inside the world of whatever story they were telling as they narrated their way through their god-talk points.

After the hour of Priesthood meeting was my favorite half hour of the day. We boys (at least those boys packing the necessary quarter) had a half hour before Sunday School and would walk the two blocks north on Main to Ma Howard’s Cafe. For 10 cents you got your RC cola and for the remaining 15 cents your Hostess fried pie. I preferred the apple or cherry most of the time.

We had to be back by 10:00 cause that’s when Sunday School started. By this time the chapel was full of folks – men, women and children. I usually sat in the pews in the southeast corner of the chapel where the sacrament (communion for you non Mormons) table was located. Sunday School consisted of opening exercises with the usual hymn, prayer, announcements and other business. Then came a second hymn (a sacrament hymn) while older teens at the sacrament table got up and broke slices of bread into little chunks captured on trays with handles. The row of bread trays were in front of a row of trays holding little paper cups about the size of your thumb and that contained water.

Such constituted the LDS communion of bread and water (Mormons a long time ago dropped communal wine and substituted water.) After the song and the bread was broken one of them older boys read a set sacrament prayer over the bread and stood patiently while us younger Deacons came forth to be handed one of the trays of broken bread which we would then in organized manner (almost like jets in flying formation) spread out and passed the bread to the congregation.

I was good with that except maybe when I had to hand the tray to a row where some old guy was already asleep or some buxomy woman was nursing a baby and I’d get confused about my priorities.

After the broken bread we returned to formation and returned the bread trays, exchanging them for the trays with the little water cups sitting in small holes so they wouldn’t tip over. After a set prayer on the water, we then went through the same procedure as before.

Afterward was the Sunday School program which included a youth speaker for what was called a 2-and-a- half-minute talk, followed by other speakers and hymn singing. I remember as a youngster giving a 2-and-a- half-minute talk about the entire history of Christmas and completing the job in only 45 seconds. I didn’t know what to say for the remaining 105 seconds so I sheepishly sat back down.

After the opening exercises we all retired to our separate classes and I sat through the second of my obligatory Sunday lectures which this time included us 12-14-year-olds but also with girls of the same age. I don’t remember sitting with them girls at that age. Us boys mostly stuck together unless one of our elders (like Grandma) told us we had to sit next to a visiting cousin even if she was a girl.

Once when I was younger (maybe 8 or 9), I got uppity in a Sunday school class which was being taught by the Bishop’s wife. She lost her patience with me and smacked me on the head with her Book of Mormon. Then she started crying and hugging me and apologizing. I wasn’t even indignant, mostly embarrassed and hoping she wouldn’t tell Grandma about my uppityness.

Around 11:45 a.m. the whole dang torture session came to a merciful end and we were released to go home. The rest of Sunday was mine for kid stuff which included outdoor games and exploring in the summer and un-micro-managed indoor stuff where Mom was not what they nowadays call a “helicopter parent” and just wanted us to stay out of her way.

Sometimes we’d go for Sunday drives where Dad usually would take us to Lava Hot Springs, stopping at Mike’s Tavern about half way for a beer or two while Mom smoldered in the car and we kids were hoping for a 7-Up or Hershey bar. Then we’d go to Lava where there were possibilities of swimming and stuff.

On the days when we weren’t out of town, the whole dang churchiness stuff started up again around 7:30 in the evening. We all gathered at the church for Sacrament Meeting. After the usuals, we’d go through the Sacrament bread and water routine and then settle in for the endurance ritual.

Usually there’d be three speakers for the next hour or so and boy, did those subjects ever get boring! Especially on hot summer nights. This was what separated the old men and the boys from the younger adults. Us young’uns and old guys could more or less fall asleep and get away with it. But the prime-aged adults didn’t dare cause they were supposed to be the examples, or in some cases they might be preparing themselves for future calls (opportunities) to leadership jobs and needed to look sharp, alert and attentive at all times.

So sleeping on a hot Sunday evening was a risk we had to take. Reminds me of a couple of stories with which I’ll end my reminiscences about Sundays.

These are apocryphal or anecdotal or whatever you call them. Maybe they happened and maybe they didn’t; but they COULD have!

Brother Brown was visiting the ward (what we called our congregations) as a Stake High Councilman. When they came, we had to live through what seemed an hour for his talk alone.  And High Council subjects were usually the most boring.

Anyway, it seems that Brother Brown fell asleep during the Sacrament Meeting preludial activities before his talk. When it was time, the Bishop stood up and said solemnly,

“We will now be favored with a talk from our Visiting High Councilman, Brother Brown.”

Then more flustered and sort of louder, “Brother BROWN!”

Brother Brown woke with a start, lost and confused (of course he was), groggily got to his feet, walked to the dais, and – are you ready for this? Brother Brown said the closing prayer. That’s how he became my most favoritist High Councilor ever!

It seems that on an especially hot summer evening during Sacrament Meeting, the Deacon assigned to sit toward the front by the sacrament table and do the Bishop’s bidding (you guessed it) fell asleep after his morsel of bread and water.

The chapel was full; you know, Standing Room Only.

Suddenly the doors at the back of the chapel opened and in walked the Stake Presidency, the three most important men in the Stake, which is like a diocese – you know, a bunch of wards(congregations). Well, the Bishop sprang into action, using hand gestures to get the attention of the appointed Bishop’s-errand Deacon who had fallen asleep.

Eventually, half-groggy, the Deacon closed his mouth, looked around self-consciously, and noticed the Bishop making frantic hand gestures at him. The Deacon’s expression became quizzical.

The Bishop surreptitiously pointed to the back of the chapel where the three important dudes were standing, and silently mouthed the words “STAKE PRESIDENCY”, apparently thinking the Deacon could read his mind.

The Deacon entered into the word-mouthing game.

The Bishop’s eyes flared with agitation.

“THREE CHAIRS!! FOR THE STAKE PRESIDENCY!!”

The Deacon got a look of total confusion and nervous reluctance.

The Bishop moving toward frantic-ness.

The bishop in his most authoritative expression of order-giving almost shouted what he growled in silence.

So the awakened, confused, somewhat terrified but courageous young Deacon stood up and shouted like he was watching the high school football team play Soda Springs.