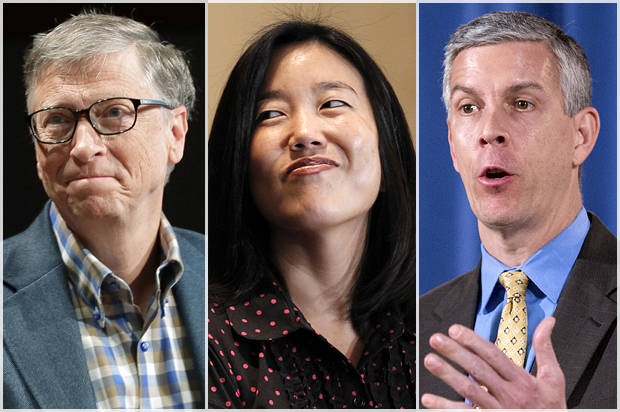 Long, but informative and worth reading

We’re onto the phony education reformers: Charter school charlatans and faux reformers take it on the chin – After years of attacks on teachers and public education, Americans are catching up to the real story in our schools – Salon.com JEFF BRYANT

For years, an out-of-touch establishment has dominated education policy too. A well-funded elite has labeled public education as generally a failed enterprise and insisted that only a regime of standardized testing and charter schools can make schools and educators more “accountable.” Politicians and pundits across the political spectrum have adopted this narrative of “reform” and now easily slip into the rhetoric that supports it without hesitation.

… The education counter-narrative is that public schools are not as much the perpetrators of failure as they are victims of resource deprivation, inequity in the system and undermining forces driven by corruption and greed. In other words, it wasn’t schools that needed to be made more accountable; it was the failed leadership of those in the business and government establishment that needed more accountability.

… Also, comments made by establishment presidential candidate Hillary Clinton will reverberate through the election in 2016. Specifically, at a town hall held in South Carolina, broadcast by C-SPAN, Clinton responded to a question about charter schools by saying, “Most charter schools, I don’t want to say every one, but most charter schools, they don’t take the hardest-to-teach kids. Or if they do, they don’t keep them.” A week or so later, Clinton transgressed the status quo again by remarking, in a conversation with members of the American Federation of Teachers, “I have for a very long time also been against the idea that you tie teacher evaluation and even teacher pay to test outcomes. There’s no evidence. There’s no evidence.”

Organizations and individuals connected to wealthy donors to the Democratic Partywere appalled, but the truth is out, and skepticism about education policy prescriptions touted as necessary “reforms” to the system has now left the fringe and become mainstream.