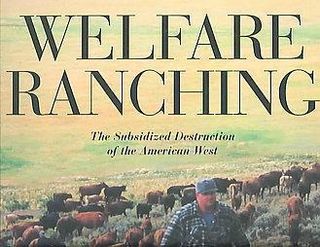 You don’t have to be smart, just macho, ridiculous and hypocritical.

The truth is that “welfare ranching” is alive and well in Harney County, as it is throughout the West.

Taxpayers heavily subsidize those who raise cattle on public lands. So it is ridiculous that the militants are complaining about federal control of those lands, when ranchers benefit so much from publicly financed giveaways.

Thank you, Oregon militiamen: The longer you stay, the more ridiculous you and the conservative movement look

In other words, these are people who want to dismantle the social safety net and resent the federal government providing basic life necessities to people in need, such as food, shelter and healthcare.

But while they resent every bite of food going into a poor child’s mouth, they are threatening a violent standoff on the grounds that the taxpayers should be feeding their cows for free. And let’s be clear, this isn’t a “cow rights” issue. They want the taxpayers to feed their cows, but rest assured, they plan to keep all the profits off selling the cows we fattened up for them. It’s the equivalent of a car company asking the government to simply give them the steel for free to make cars.

So far, however, the government shows no interest in giving the militia the violent showdown they long for, instead seeming content to wait them out, secure in the knowledge that this particular bunch of idiots are not the hard asses they pretend to be and will likely get cold or bored and leave on their own soon enough, tails tucked neatly between their legs.

It turns out that this is the best possible decision federal authorities could have made. In fact, it’s increasingly clear that this clown show is, if anything, a huge gift to liberals. Every day that these yahoos are out there, they expose how empty and stupid the myth of the “rugged individual” that the right so romanticizes really is. Instead, we get to see that these supposedly rugged individuals are, in reality, extremely silly people who are mostly there to play dress-up, engage in fantasies of self-importance, and beg the government to give them free money so they can get rich.