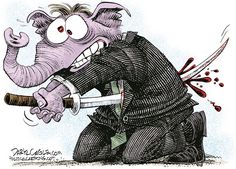 In our predominantly two-party system one of them is no longer credible as a party that knows or controls its own constituency; a party that is proving to have no idea how to govern wisely. Take a seat folks until you are ready and able to make and honor promises.

Having been embroiled in partisan advocacy for years, I reached a place of understanding that one man’s scandal is another man’s opportunity to exploit in the name of furthering his own cause. Getting burnt out with the frustration of partisan participation, I am possessed by anger and outrage with “everybody’s emails” and not the petard upon which those with whom I disagree are currently being hoisted.

That’s why Colin Powell and Condoleeza Rice have said what they said about Benghazi as a “stupid witch hunt.”

The issue is merely the current scandal around what has become SOP (standard operating politics):

… the ongoing scandal of our continuing loss of civic wisdom,
… loss of our understanding of civic duty
… and our seeming social ignorance of how low-functioning our representatives and representation has become.

This business of Benghazi for example s is nothing more and nothing less than that.

Specifically I am angry about low-functioning politics in both parties. I am angry that my community has reelected several times a U.S. representative whose party has done very little civically for the good of our community and nation — because, for example, they’ve been too busy trying to repeal the ACA more than 50 times.

I’m angry about lobby money in government,
… about willful obstruction and refusal to follow the Constitution in ALL things and not just the areas where someone feels they can make someone else look bad.

That’s one of the big things I learned from my teacher in his government class in high school. I listened to him, believed him and thought more of what he taught than all the fortune, glory and social rewards of being a teen musician and athlete.

Making someone else look bad is not good civic duty nor is it good politics.

At my age, I’ve pretty much had it with politics. It’s out of our hands and the boomer generation – even with a boomer president (the last we will probably have unless civic ignorance continues) – needs to take its hands off the steering wheel and foot off the accelerator.

It’s not our world anymore and many of us are deluded in thinking that our collective aged wisdom has all the right answers. That’s why civic participation among all ages is so important.

I think that once this election is over I’ll do better for myself by working on another novel, more poetry and taking my sweetheart on a long drive to look at Fall colors in the trees.