Your favorite party is the only one that can produce an agenda and an “electable” candidate to preach that one true agenda.

Other parties are part of some nefarious conspiracy to destroy Your Favorite Party along with Your Beloved Country as You Know It.

Supporters of other parties are motivated by group-think that consists of less drinkable bathwater than that of Your own Favorite Party.

Supporters of other parties are operating in bad faith and only pretending to be liberals, progressives, conservatives or tea-snots.

Everyone knows that if Your Favorite Party is not number one on the corporate lobby buy-in-and-sell-out respect ladder, it will move up to number one someday soon if enough of the farm is given away.

The Country would be better off if parties were more accurately self-identified by their name and agenda – even if that meant more parties.

We need at least a strong third party to keep the other two honest. Can’t think of a better way to un-dummy the electorate than candidates who ask the voters to:

… or maybe combine the last two into the dumb notion of an American Exceptionalist Ticket and help us see what we have become. 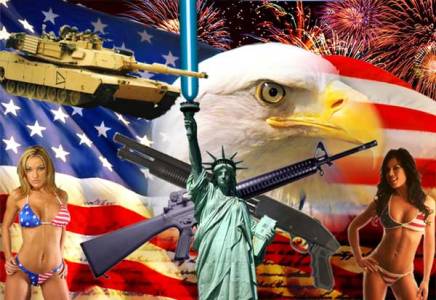 That way, if we then befuddle our way once again down to two parties, you might see two surviving parties with a genuine philosophical and political differentiation.

Or am I only wishful for a party that believes in blunt truth telling and direct confrontation of bull crap from blowhards and civic nitwits when they see it?

Oh, I’m hoping the current Democratic party will stop running around in policy and philosophical circles posing as stragedy and tactics.  It seems that the powers that be are  those who bleat and bray in defense of the party faith and continue to demonstrate  calculated selective blindness that costs elections.

The on-going foolishness in the Republican camp perhaps overrode the one gigantic lesson learned from current campaigns and elections. Voters tend to a leader who’ll talk straight talk, speak directly to the people about his personal values and opinion, shoot (speak) from the hip and pose as a tell-it-like-it-is guy even if he is doing nothing more than schmoozing the gullible.

As a much younger voter, I tended to respect the electoral will of the people as an expression of high elective wisdom – even when it disagreed with how I voted.

Truth is we have demonstrated a clear lack of civic wisdom and critical thinking when we vote. We are not dominated by a sophisticated majority of folks who’ve read the political philosophers.

American voters need arousal. As recently demonstrated they will follow the candidate who picks up the standard, waves it in our faces and says “FOLLOW ME!”

Where are the intelligent and thoughtful candidates who in reality want to become moderator of a forum-based democracy where rational thought and slow deliberation toward consensus are the literal wheels of the national wagon.

Why do our candidates speak as if they are in a stadium shouting to choir that knows but one song?

We don’t seem to have that kind of democratic republic.

Because it’s too theoretical for a population that is too democratically unwieldy and too busy with unimportant distractions to pay sufficient attention.

The country doesn’t want to be governed by consensus.

We seem to want a poser who tries to act like Lincoln, fight like Washington but acts like the most uninformed and immature sixth grade bully.

Can we be smart?

Can we winnow through the rhetorical nonsense and find an able and competent leader who doesn’t mirror a sound-byte consensus wishful thinking.

Or are we to be forever stuck with the cockeyed cowboys and cowgirls of Calico County.

The Gunfighters by Ben Willsher