The fear-of-Trump trauma must be powerful to prompt such civic betrayal. Like Covid-19, the TrumpFear virus is still infecting the moral fiber of our citizenship responsibilities. Sneaking out of the woodwork, the virus shows up suddenly and in what seems to be unlikely places.

Choosing honesty and integrity over the temptation to fly with the monkeys is apparently much more difficult – even though the Flying Monkey villain has lost his potency and squats on  his throne oblivious to the debacle of his own electoral demise.

Lindsey Graham Is the Worst A former staffer explains why Graham is everything that’s wrong with American politics.

For the chairman of the Senate Judiciary Committee to suggest to a Secretary of State that thousands of ballots should be thrown out is outrageous. Graham is not just dabbling in illegal behavior, he is seeking to undermine the bedrock of our republic: free and fair elections.

If Lindsey Graham had any sense of shame, he would resign from the chairmanship of the Judiciary Committee. And since he obviously does not, there should be a Senate ethics inquiry into this conduct.

But of course, that won’t happen, either. 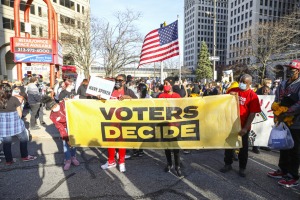 Stabler: I’m not going to try to change your minds. I’m just going to let you know that the Trump stain; the stain of racism that you William Hartmann and Monica Palmer have just covered yourself in, is going to follow you throughout history. Your grandchildren are going to think of you like Bull Conner, or George Wallace. Monica Palmer and William Hartmann will forever be known in southeastern Michigan as two racists who did something so unprecedented that they disenfranchised hundreds of thousands of Black voters in the city of Detroit, because they were ordered to.