This piece was distributed by the Progressive Media Project in 2006.
Howard Zinn died on January 27, 2010.

Put Away the Flags

On this July 4, we would do well to renounce nationalism and all its symbols: its flags, its pledges of allegiance, its anthems, its insistence in song that God must single out America to be blessed.

Is not nationalism — that devotion to a flag, an anthem, a boundary so fierce it engenders mass murder — one of the great evils of our time, along with racism, along with religious hatred?

These ways of thinking — cultivated, nurtured, indoctrinated from childhood on — have been useful to those in power, and deadly for those out of power.

National spirit can be benign in a country that is small and lacking both in military power and a hunger for expansion (Switzerland, Norway, Costa Rica and many more). But in a nation like ours — huge, possessing thousands of weapons of mass destruction — what might have been harmless pride becomes an arrogant nationalism dangerous to others and to ourselves.

Our citizenry has been brought up to see our nation as different from others, an exception in the world, uniquely moral, expanding into other lands in order to bring civilization, liberty, democracy.

When the first English settlers moved into Indian land in Massachusetts Bay and were resisted, the violence escalated into war with the Pequot Indians. The killing of Indians was seen as approved by God, the taking of land as commanded by the Bible. The Puritans cited one of the Psalms, which says: “Ask of me, and I shall give thee, the heathen for thine inheritance, and the uttermost parts of the Earth for thy possession.”

When the English set fire to a Pequot village and massacred men, women and children, the Puritan theologian Cotton Mather said: “It was supposed that no less than 600 Pequot souls were brought down to hell that day.”

On the eve of the Mexican War, an American journalist declared it our “Manifest Destiny to overspread the continent allotted by Providence.” After the invasion of Mexico began, The New York Herald announced: “We believe it is a part of our destiny to civilize that beautiful country.” 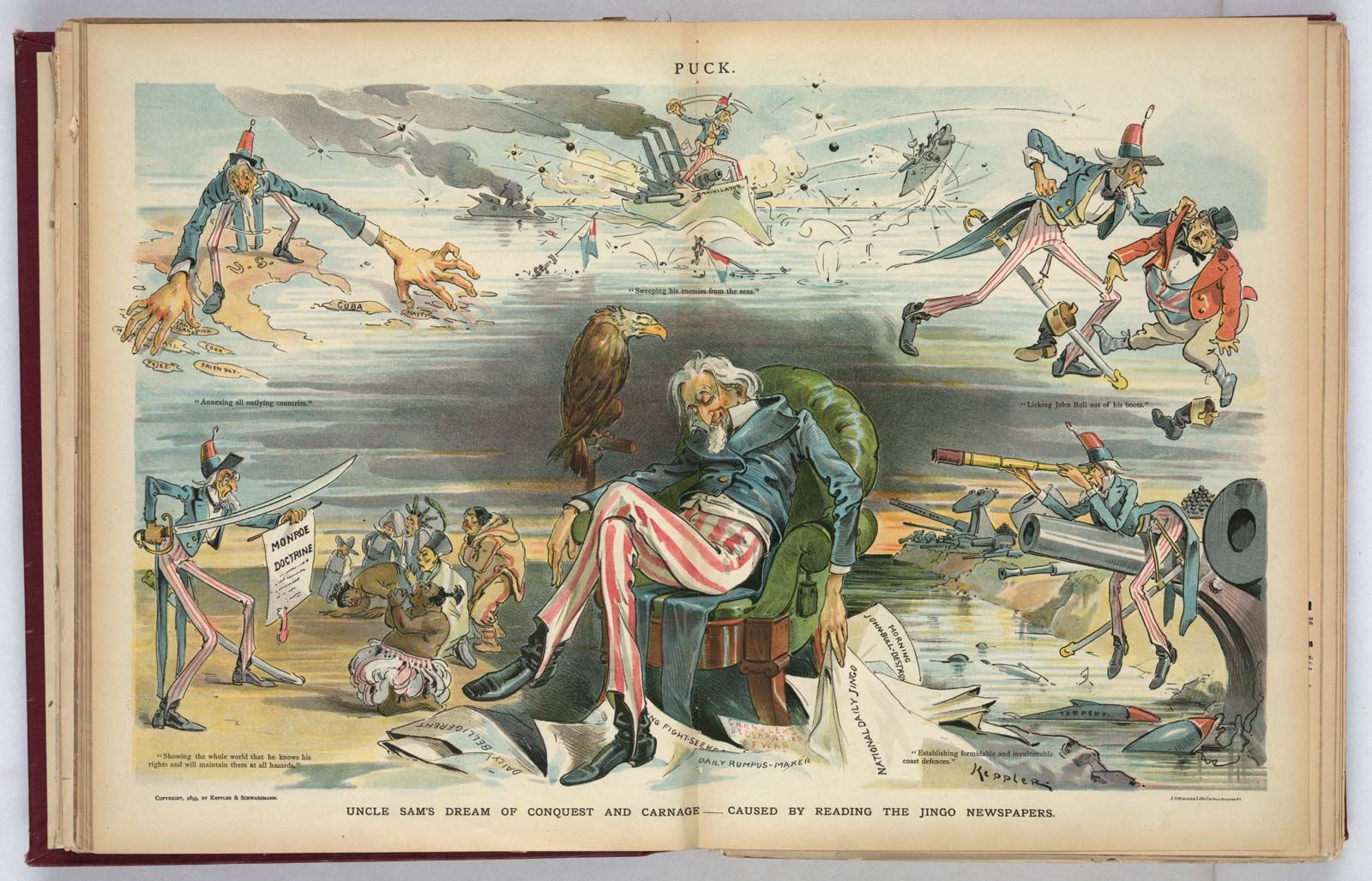 It was always supposedly for benign purposes that our country went to war.

We invaded Cuba in 1898 to liberate the Cubans, and went to war in the Philippines shortly after, as President McKinley put it, “to civilize and Christianize” the Filipino people.

As our armies were committing massacres in the Philippines (at least 600,000 Filipinos died in a few years of conflict), Elihu Root, our secretary of war, was saying: “The American soldier is different from all other soldiers of all other countries since the war began. He is the advance guard of liberty and justice, of law and order, and of peace and happiness.”

1906 – Moro Crater massacre
Post war in the Philippines
“General Wood was present and looking on. His order had been ‘Kill or capture those savages.’
Apparently our little army considered that the ‘or’ left them authorized to kill or capture according
to taste, and that their taste had remained what it has been for eight years, in our army out there –
the taste of Christian butchers.” — Mark Twain

We see in Iraq that our soldiers are not different. They have, perhaps against their better nature, killed thousands of Iraq civilians. And some soldiers have shown themselves capable of brutality, of torture.

Yet they are victims, too, of our government’s lies.

How many times have we heard President Bush tell the troops that if they die, if they return without arms or legs, or blinded, it is for “liberty,” for “democracy”?

And nationalism is given a special virulence when it is said to be blessed by Providence. Today we have a president, invading two countries in four years, who announced on the campaign trail in 2004 that God speaks through him.

We need to refute the idea that our nation is different from, morally superior to, the other imperial powers of world history.

We need to assert our allegiance to the human race, and not to any one nation.