When we lived in Bay Center, on Willapa Bay (the Washington coast), our next door neighbor had a  little but loud dog, Tito;  a ferociously loud yapper who took it upon himself to defend his territory against all invaders.

That pesky neighborhood-disturbing yapper once caught my attention and I looked outside. Someone had thrown what looked like popcorn out on the road in front of the neighbor’s house and ten to fifteen crows were hanging around after the free grub.

Tito thought not. I watched then as the crows first positioned themselves on telephone lines and trees in a kind of tactical circle so that Tito would be busy trying to keep them all away. When a few of the crows landed at one end of the food, Tito went after them. On the opposite side, other crows swooped down and began feasting. Tito of course turned and roared after the offenders leaving his previous quarry free to move in themselves. It took less than 10 minutes for the popcorn to disappear.

I thought about how the defensive tactic of airborne bombers and submarines illustrates the value of diversion as a means of avoiding destruction. When the pilot or submarine commander orders the release of chaff after an enemy air-to-air missile or torpedo is discovered, the result is supposed to be that the “electronic” attention span of the missile or torpedo is disrupted, distracted and veers off in pursuit of a pseudo target. The planes and submarines remain free to pursue their objective.

Well, the bad guys are using chaff on us.

It seems that like torpedoes, air-to-air missiles and Tito the homeland protector, we who strive to challenge and resist the foreign and domestic policy agenda that Mr. Trump relentless pursues, face an almost daily dose of distracting chaff and crows who draw our attention away. We chase the chaff and run around barking at the distracting crows  while the real vultures stay their course and swoop down on the unsuspecting to bite off more and greater chunks from what is of the people, by the people and for the people.

In this regard, I suppose many would say that manipulators a la Trump and company do their job with so-so success based on skill and powerful success based on voter gullibility. I’m not ready to ascribe to the Trumpsters some idea of superior genius that most of us lack. I do acknowledge their willingness – the outlandish gall, if you will – to simply go ahead and try whatever works; whatever can be gotten away with.

Since the title promises something about Sharia Law let me make a few observations that I have seen elsewhere and are not necessarily my own original thoughts, although I intensely agree with them.

SHARIA LAW  and  REPUBLICAN PARTY AND SUPPORTERS. Both pursue
Government based on Religion
Women with less rights than men
Gays persecuted, and physically attacked
Science rejected religious doctrine pushed
No separation between church and state 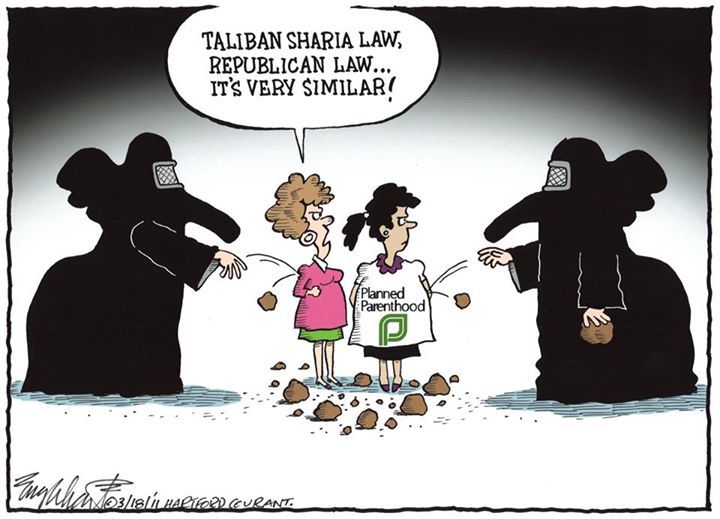 The truth is, no one – in any official government or political party (Democratic, Libertarian, Republican, Constitutional or Green) capacity has suggested or proposed that the United States of America adopt Sharia Law as a code by which people will be governed.

However talking-head stampeders,  broadcast networks working for the bucks,  talk show hosts in need of large audiences to generate the bucks have created and pushed the rumor. Why?  Well, because  – like you and me – they need income.

Making folks unreasonably mad (or scared) enough to keep coming back pays their bills. To hell with truth, they have bills to pay and an angry gullible audience with wild imaginations fits the bill perfectly.
——————————————————————-

Which brings me back to crows, distractions and our smart dog Jake. A few days later I was cleaning out our freezer and found two loaves of special bread we had purchased a couple of years before on a trip. It was obvious by the few spots of mold, that two-year old frozen bread would not do for our menu. After letting the loaves thaw, I was about to toss them in the trash bin when I remembered Tito.

Oh, more entertainment… and I tossed both loaves out on to the road between our house and the neighbors and watched for Tito.

Tito did not appear, but my own dog, Jake, (who is part Australian Shepherd and Collie and looks like Lassie with a blunt nose) wandered out into the road and sniffed at one of the loaves. Wasn’t his cup of tea and he started to ignore it. At that point another neighbor from up the street walked by with his own dog who sniffed at the other loaf, took it in his mouth and carried it about 30 yards up the road before dropping it and moving on.

By this time the crows had gathered and Jake, like Tito two weeks earlier, found himself invested in keeping the crows from stealing the bread. He stared at the other loaf some 30 yards off as several crows landed and started biting out chunks. Jake rushed toward the action and the crows took flight. Standing over the far loaf he looked back to see the crows landing around the other loaf still on the road on front of our house.

Now Jake is not Tito, not excitable and has a herding and guarding instinct that astounds me at times. He looked at those crows for a moment, took the distant loaf in his mouth, trotted over close to the first loaf – causing the crows to fly off. He then proceeded to bury the loaf he’d carried back to our house, digging a hole less than 15 feet from the first loaf. The crows helplessly watched Jake bury that loaf knowing he was not to be distracted.

When he was through, he trotted over and “stayed the course” with the remaining loaf – keeping the crows from their thievery. I don’t know how long Jake sustained his vigil but I realized that his own tactic of setting aside one distraction for another more appropriate time while continuing with his original task of preventing the crows from achieving their objective was a valuable life lesson.

Think about that the next time you encounter chaff meant to distract you; things like immigrants taking your jobs, Sharia Law, Hillary’s sins, Obama’s birth certificate or just plain satanic liberal agendas.

Although they may evoking sufficient media interest that worsens with public gullibility, they are still not credible topics worthy of attention. Aren’t there more important things upon which your anti-aircraft missiles and anti-submarine torpedoes ought to remain focused, locked and loaded?

Partisan manipulators are not geniuses. Their strongest attribute is cunning combined with a willingness to try anything that might work.

Working to think one or two steps ahead of them is hard but not impossible. The benefits are enormous – the ability to ignore nonsense while closing in on the underbelly itself.

There are intelligent ways to sort out flying bullshit when it fills the breeze around you. Those who thrive on un-original thinking – in effect attempting to be seen credibly by copying and pasting their way to glory – for the most part break one or several of the following when trying to be seen as persuasive.

Should we continue to look the other way and pretend that reality shows, serial killers, dancing contests and comic book television and movies are more important? Is it not a false notion that truth omitted from our most prominent broadcasters must not be relevant if they are not talking about it?

Do we let spin doctors and propagandists encourage us to ignore things that should arouse in us the most intense indignation one can imagine – an indignation that we as a people truly did not authorize a president to do?

Is the president once again going to continue to try to fool most of the people most of the time?

Only the sleepiest among us believe fair and balanced campaigns from Foxy liars are going to lead to a fair expression of what should be done about Iran that’s in the best interest of corporate America.

Only the blindest followers of a misunderstood code continue to insist the citizens are not patriotic if they don’t blindly accept the unchallenged political self-interest of its commander-in-chief and his doofus decisions.

Perhaps the sleepiest among us are those who thought they were doing God’s work by voting for the incumbent in 2016.

Why? Because only the most outrageous Christian hypocrites make mountains out of moral molehills at the expense of the heart and compassion of the real teachings of Jesus.

Why do we let these people sell us bridges and worthless stock in pseudo-American ideals that no majority of us ever endorsed?

Why do we robot-like jerk to attention when leadership waves the flag.

But then, maybe worrying about liberals and rumors of Sharia Law ARE significantly more important than the reality we live in.

One thought on “Sharia Law, Deth to Liburals and the Silly Section at its worst.”