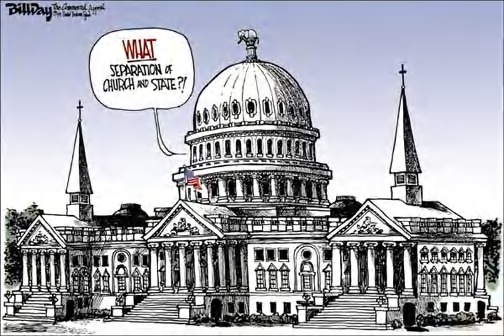 (I first published this two years ago. It fits more now than it did then and it certainly fit then)

Bring in more non-Christians, humanists and atheists. We need them

In a nation that consistently ranks atheists near the bottom of the “feeling thermometer,” identifying as a nonreligious or humanist candidate has traditionally been seen as a “bad” political move. But a new poll shows there’s virtually no political cost for elected officials to identify as a member

Going back to beginnings, religions have inspired the best and highest motives and outlooks human beings have been capable of. Those have been religion’s finest moments.

Unfortunately, those moments are far outnumbered by the tragedies and atrocities done in the names of gods and goddesses – all of home are nothing more than Invisible Friends – or Enemies to humankind.

Why humanists and atheists?

Evidence that religion is man-made and has no basis in reality will become overwhelmingly obvious once the governmental and civil structures that perpetuate supernatural myths are dismantled. In reflective moments, formerly religious people will exclaim, “How could I have believed that silly myth!”

People will recognize that social ethics and morality are unrelated to religious belief, particularly to the reward-punishment inducements of believing in heaven and hell. The notion that people cannot be good without god will be unveiled as an absurdity. Secular humanists will be recognized as among the most ethical and socially responsible members of society.

Religious holdouts will be regarded with indulgent bemusement, as is an immature 10-year-old child today who insists Santa Claus is real. – Dan Dana, The Reason Revolution: Atheism, Secular Humanism, and the Collapse of Religion

Our national history includes hordes of big-mouth religious zealots – some genuinely pious; others opportunists who based their civic and social thinking on a literal-minded devotion to their special Invisible Friend.

This pestilence thrives among us despite the fact that no Invisible Friend has ever endorsed or commended hatred in any form.

Non -Christians and pagans are murdered all over the world because big-mouthed religious zealots have pretended to be their Invisible Friend’s go-between who speaks because the Invisible Friend does not speak.

Religions have gone to war hating each other, hating their own own unworthy believers, hating human failure to buy into their personal mythology of a special invisible friend.

How many Invisible Friends are there?

Which is the true one?

I grew to adulthood being told by the priestly middlemen around me that my church was “the only True and Living Church on the face of the Earth.” There was no proof for this statement so I was coached into believing the words of the Church’s Invisible Friend as passed on to me by trusted priestly middlemen who of course would say nothing contrary.

In 2012 the Pew Research Center reported 2.2 billion Christian believers, 1.6 billion Muslim believers and 1.1 billion Hindus – all believing they possessed the ultimate Divine Truth and were heirs of their corresponding Invisible Friend.

Mark my words. Humanists and Atheists are not the source of the palpable religious and bigoted hatred in the United States.

How much are our individual lives shaped by inner scenarios based on assumptions we have been taught to accept as absolutely true?

Imagining and Invisible Friend who is some kind of monarch of commandments religion has produced nothing more than, as Sam Keen described it,

“an intricate set of interlocking stories, rituals, rites and customs that inform and give the pivotal sense of meaning and direction to a person, family, community or culture.
The myths we carry around inside include unspoken consensus, the habitual way of seeing things, unquestioned assumptions, and our ‘automatic stance’.”

A society lives on its own unconscious conspiracy to consider a myth the truth, the way things really are. We seem to be cursed – and I mean CURSED, not blessed – by a political  majority who are literal without thinking; men and women who are not critical or reflective about the guiding “truths” – myths – of their own group.

During that day I asked all kinds of people of every age, “You know the ‘I pledge allegiance…’, but before I could finish, at once they would all parrot it, the words almost always equally blurred. In every case, I discovered that not one teacher, ever — or anyone — had ever explained the words to any one of them.

Everyone just had to learn it to say it.

The Children’s Story came into being that day. It was then that I realized how completely vulnerable my child’s mind was — any mind for that matter — under controlled circumstances.

Normally I write and rewrite and re-rewrite, but this story came quickly — almost by itself. Barely three words were changed. It pleases me greatly because it keeps asking me questions…

Questions like what’s the use of ‘I pledge allegiance’ without understanding?

Like why is it so easy to divert thoughts and implant others?

Like what is freedom and why is it so hard to explain?

The Children’s Story keeps asking me all sorts of questions I cannot answer. Perhaps you can — then your children will…”

One thought on “A Christian Nation we are not and ought never be.”